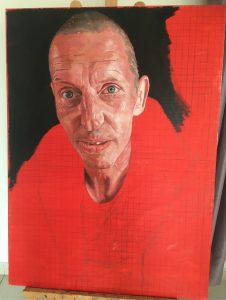 I met Joe Crow in Winchester, England in 2017 and got to know him. I had met so many homeless people who had had enough, who really wanted to escape this world, yet Joe Crow was different. He had encountered so many problems, so many traumas yet he kept going, he looked forward he did not look down. A kind and gentle man full of hope. I really wanted to paint him.
As with all my paintings I primed the canvas with red paint. This allows me to see clearly any parts of the painting that I have not painted as the red shows up clearly but more importantly I feel it makes the painting glow. It took me about  a day to paint the rough image of the face. The aim being to get the proportions and light correct.

Once the rough image is dry I will then embark on my favourite aspect of any painting and that is painting the face in detail. This involves many hours and days and many very fine brushes. I use liquin to help the paint flow. Once the face is done I can work on the background. I tend to add various objects to the painting to help push the message that i wanted to promote. I added the cardboard with the words “homeless”. I wanted this to show how the homeless are labelled and viewed as an invisible collective rather than visible individuals. i added the chains because I felt that the homeless tend to feel chained and locked in to their circumstances. Joe Crow had tried to escape homelessness many times yet his chains stopped him from truly escaping. I added the t-shirt to display the monster of capitalism where people seem to be putting material possessions before love and kindness of their fellow human beings. I also wanted to change the lighting somewhat to almost divide the face into two- Hope and Fear, the two emotions that I felt with Joe. It was an honour for me to paint such a good and inspirational person.